"The human voice is the organ of the soul"
Henry Wadsworth Longfellow, poet

"You know the drum was the first instrument besides the human voice."
Billy Higgins, jazz drummer 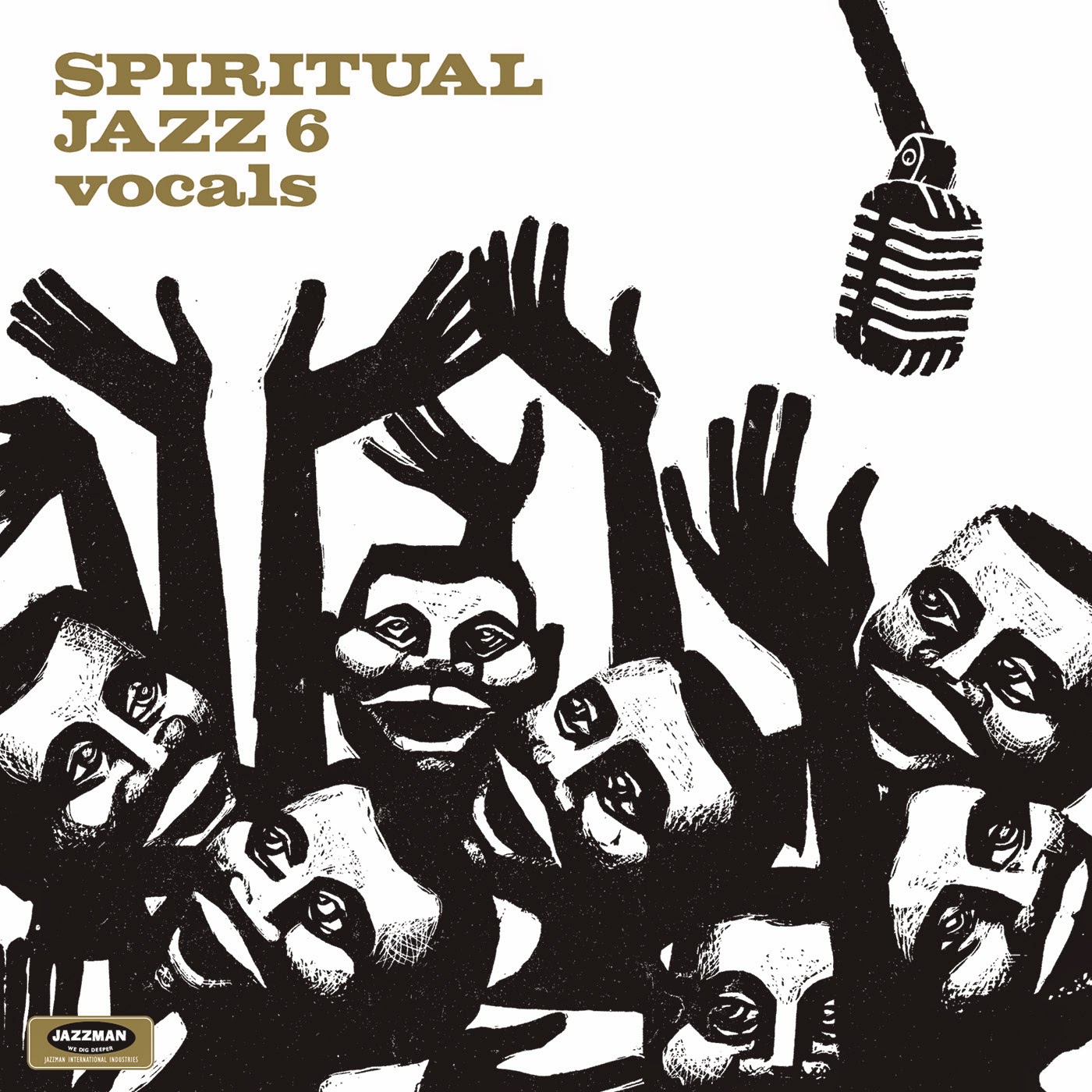 The power of the human voice, especially when held in song, has long been known to be immensely influential, potent and emotive across all of humankind. When conveying a message, the spoken word - whether in speech, poetry or song - is infinitely more evocative than that of written. And when that message is voiced in the realm of jazz, amidst the open and dramatic freedom that only jazz can provide, the message can be all the more poignant.

Having examined spiritual jazz as it was expressed in the US, and then followed its messengers and influences in Europe and beyond, our sixth instalment of our Spiritual Jazz series showcases jazz vocals: a collection of jazz messages that are united in voice.

The majority of tracks here are as political as they are theological, but it’s the inner sanctity of the music that is the defining factor. These are songs that concern themselves with the universal condition of this world, as well as the next.  In fact, as the distinction between the theological and the humanistic is blurred, so is the definition of a song – many of the tracks are atypical in that they do not possess lyrics with a beginning, middle and end. Likewise the voices that convey them often can't be said to be 'singing' in the usual sense of the word; we hear solemn chanting, intense wailing, earnest poetry and ardent recitation in between bouts of singing, the quality of which is often nothing short of exquisite. The styles of performance encompass modern jazz, the avant-garde and jazz fusion, and include elements of styles from the long and winding path of the African diaspora, including Cuban, Brazilian, Caribbean and other Pan-American rhythms.

Spiritual Jazz 6: Vocals examines some of the rarest and most extraordinary vocal jazz recordings. We have included some well-known songs, as well as some of the most obscure. There are tracks recorded made for major labels, and some that were issued privately. But all of them speak or sing of a better place or a better world, and the world can only be a better place when they are played.

This is esoteric jazz, modal jazz, spiritual jazz – as performed with the human voice.

·         All tracks fully licensed and digitally restored from the original master tapes
·         Comprehensive liner notes with added individual notes on each track and original stories direct from the musicians involved
·         CD with 24 page colour booklet with in-depth liner notes, album cover scans and previously unpublished photographs
·         Most tracks never before reissued – previously only available on rare, long-deleted LPs
·         Deluxe double vinyl LP pressing with gloss gatefold sleeve
Only on Jazzman – all because WE DIG DEEPER!

What Is Wrong With Groovin' VALENTINE SPESH Sat 14 Feb 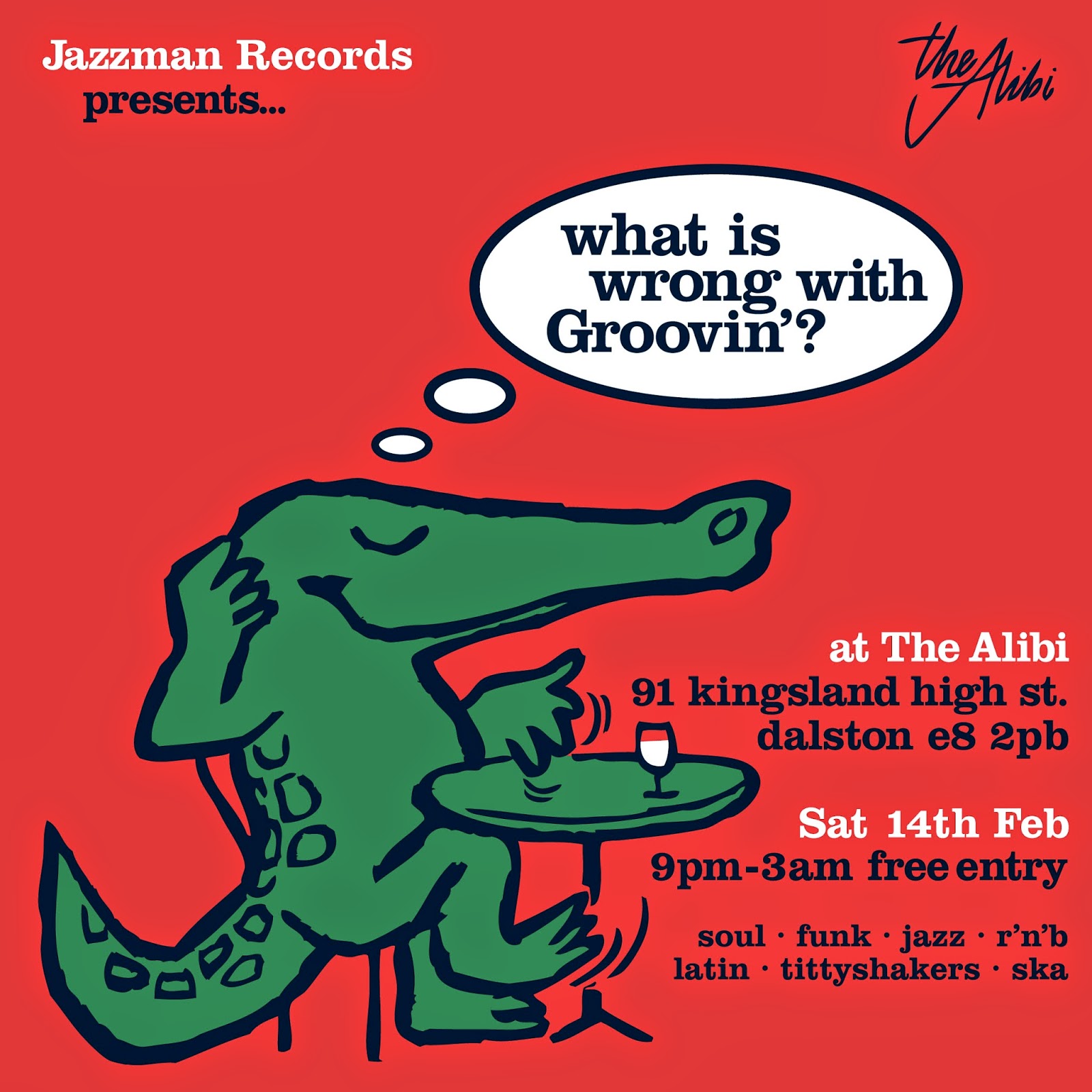 Great to see the South African drummer perform tracks from his marvellous ELO album - released on Jazzman earlier this year - with band and choir in France recently. 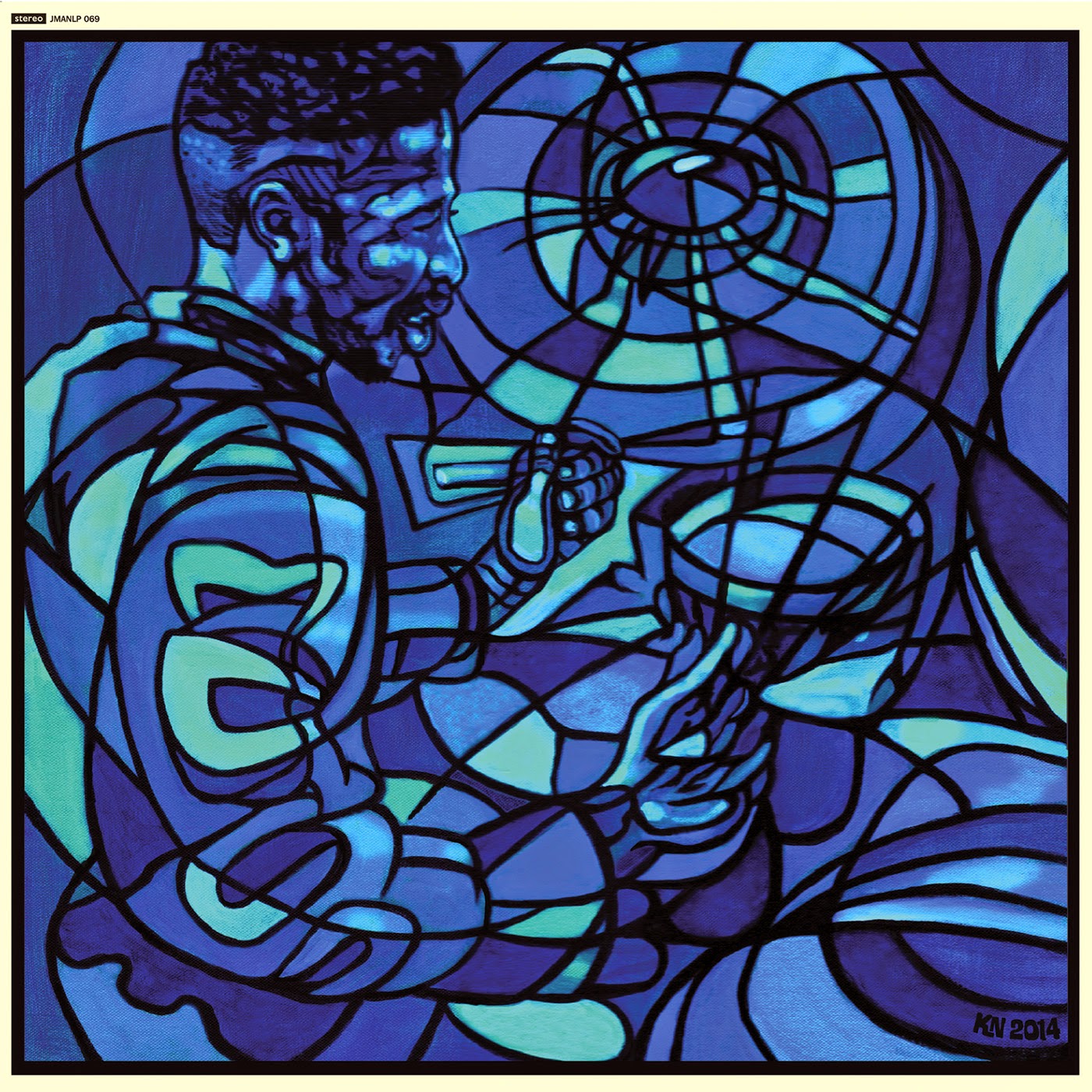 To buy the LP or CD, click HERE
Posted by Jazzman Records Blog Page at 6:01 pm No comments:

What is Wrong with Groovin' - IS BACK!

This Saturday at The Alibi, Kingsland Rd, Hackney, London. 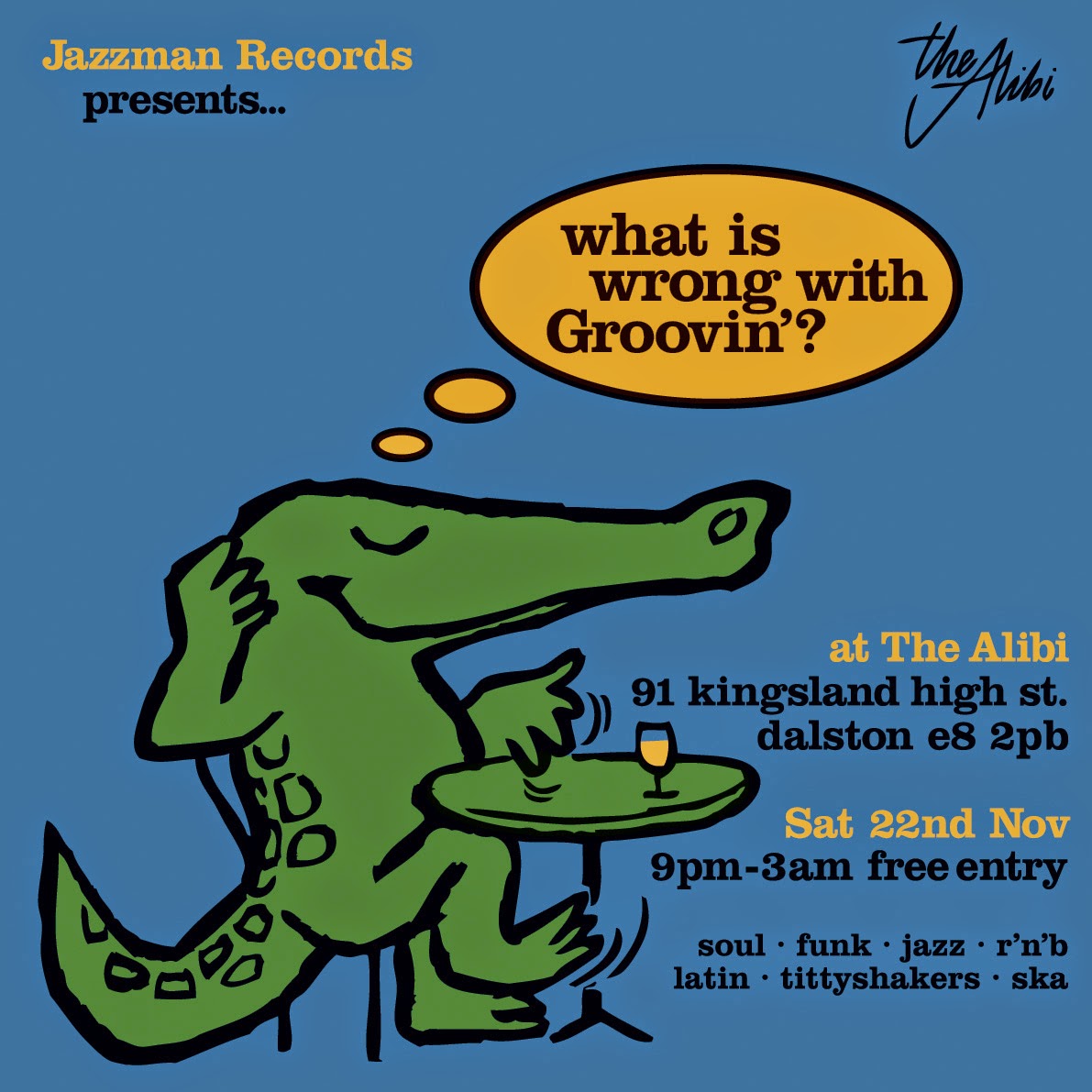 See our FACEBOOK page for more details!
Posted by Jazzman Records Blog Page at 10:45 am 2 comments:

In anticipation of Jukebox Mambo 2, here is a date for your diary:

And the album in question: 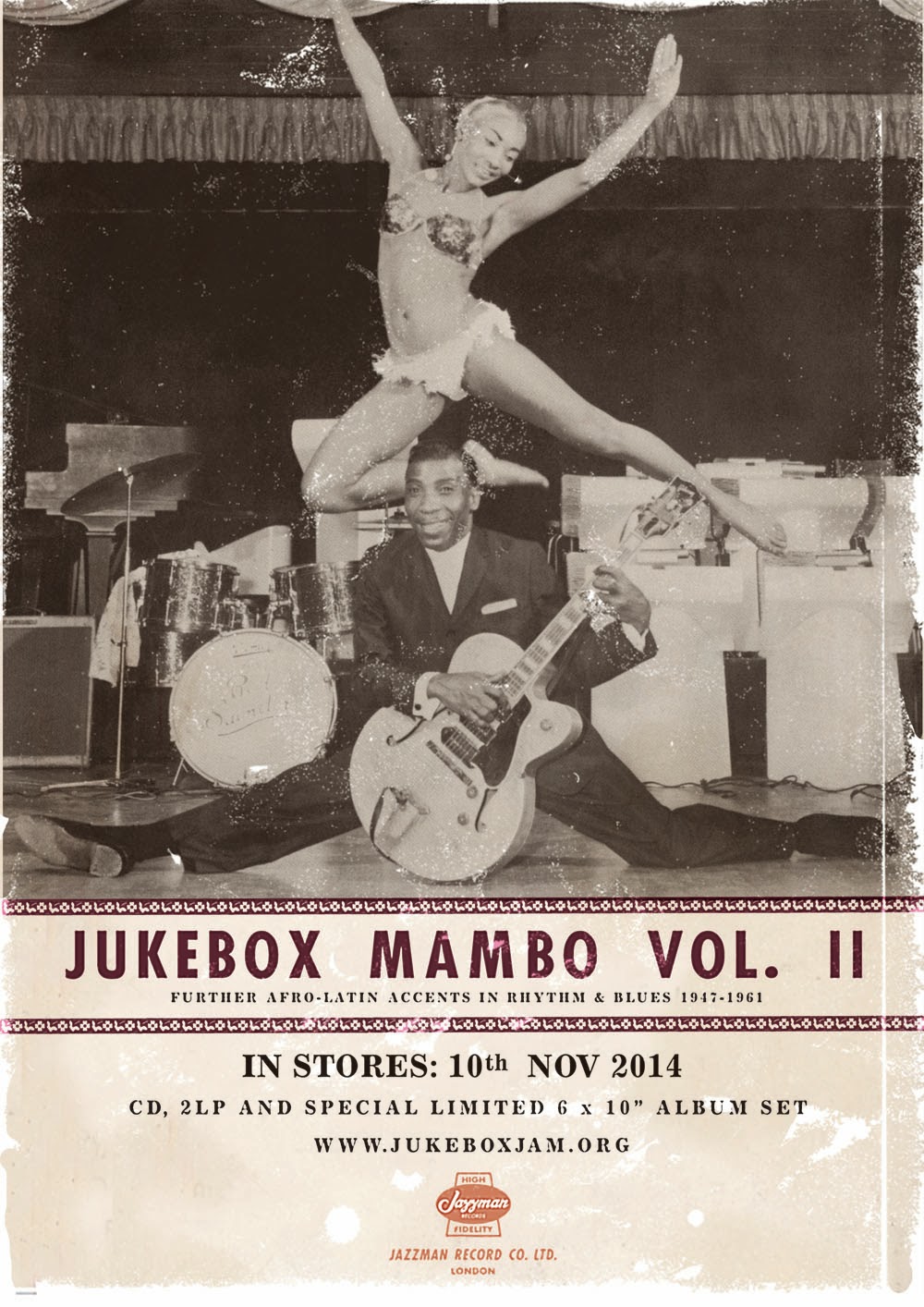 Available in each of the following formats:
Tracklisting: 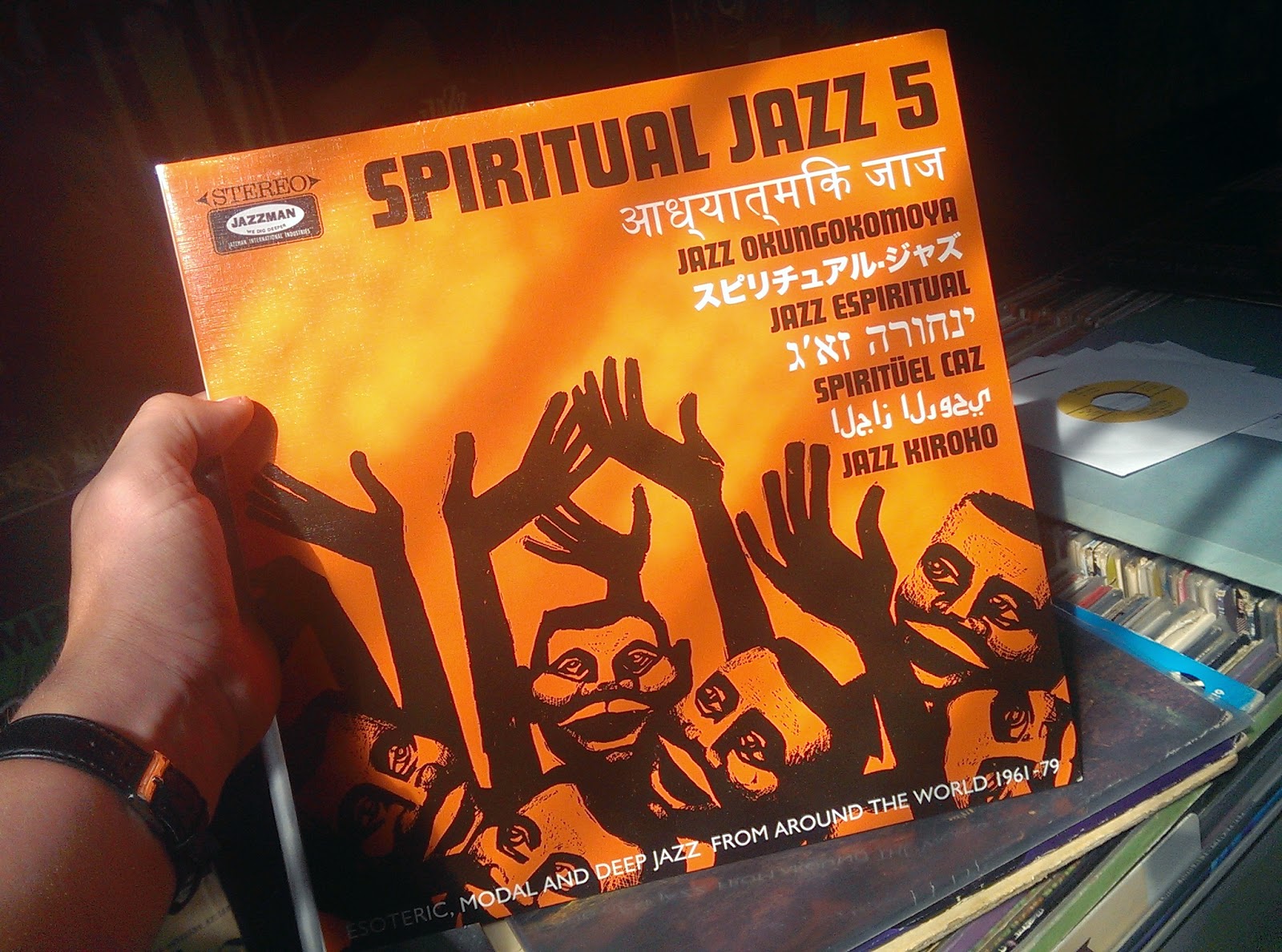 
Until it was swept aside by the pop explosion of the 1960s, jazz was the most popular modern sound on earth. From the New World and the Caribbean to Africa, across the Soviet Bloc and the British Empire to the Far East, jazz music was embraced, adopted, played and enjoyed. Having examined spiritual jazz as it was expressed in the US, and followed its messengers and influences in Europe, this fifth installment of our Spiritual Jazz series presents jazz from the rest of the world: a collection of jazz messages hailing from the four corners of the world that are united in their diverse treatment of the jazz idiom.

Jazz might have been the music of America, but in its beginnings it was not a purely American creation. The long story of its development stretches across the Atlantic, from Africa to the crucibles of slavery in the Caribbean and the Americas, both North and South. It was a music that ultimately emerged from the varied and resilient cultural achievements of Africans brought to the New World in bondage, and who brought with them a multiplicity of musical traditions. Evolution and development continued and, like a dandelion dispersing its airborne seeds via the wind, the sounds of jazz were carried around the world on the airwaves, record sales and by travelling musicians. In whichever continent the form took root, the individual, ethnic and cultural circumstances of the musicians decided the flavours and nuances of the jazz they created.

This volume of Spiritual Jazz presents some of the rarest and most extraordinary global jazz recordings. We have covered some of the wider world’s best known yet still underexposed jazz scenes – places such as Argentina and South Africa, as well as some of the world’s most obscure. There are recordings here made for major labels, and recordings issued privately. Very few of them have seen any release outside of their country of original prior to this collection. But all of them speak of a period when jazz was a global musical lingua franca, spoken with ease by musicians who headed out into the night to produce their own distinctly local translations.

This is esoteric jazz, modal jazz, spiritual jazz – as played by musicians from around the World.

·         All tracks fully licensed and digitally restored from the original master tapes
·         Comprehensive liner notes with added individual notes on each track and original stories direct from the musicians involvedA
·         CD with 16 page colour booklet with in-depth liner notes, album cover scans and previously unpublished photographs
·         Most tracks never before reissued – previously only available on rare LPs that change hands for hundreds of pounds!
·         Deluxe double vinyl LP pressing with thick, embossed gatefold sleeve
·         Only on Jazzman – all because WE DIG DEEPER!


Posted by Jazzman Records Blog Page at 12:13 pm No comments:

Jazzman Records Blog Page
Hello and welcome to the Jazzman blog. This is where I'd like to share some stories about new releases, DJ gigs, old records and other bits n bobs that you might enjoy.